A 75-year-old author, personality, and raconteur

who plans to keep on talkin’ … 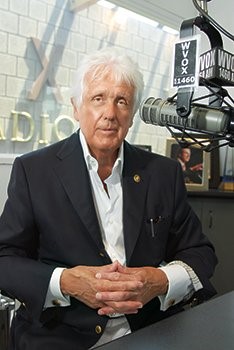 William O’Shaughnessy is sifting through a pile of photos and notes from his recent 75th birthday celebration at Le Cirque. He pulls out a lovely note of thanks from TV host Deborah Norville and then another from Jonathan Bush gushing about how fabulous the party was. Bush, the brother of President George H. W. and Uncle of George W, wrote that O’Shaughnessy has been “a great friend to a lot of people and a great supporter of important causes.”

O’Shaughnessy is an iconic figure in the world of broadcasting. In the past 50 years, he has given voice to nearly every topic under the sun as the president and editorial director of WVOX and WVIP—two of the last independent radio stations in the metropolitan area. From an interview with a Franciscan friar discussing the meaning of charity and Pope Francis to a weekly broadcast about heavy-metal music hosted by his eldest son, Matthew, O’Shaughnessy has continued to deliver what Daily News TV critic and entertainment columnist David Hinckley describes as a “glorious hodgepodge.” That hodgepodge includes listener-produced programming that O’Shaughnessy believes is part of his ongoing mandate.

“WVOX is an instrument of communication,” he explains. “I think you can build up a community and make it better through radio. In Mario’s words, you can make it ‘sweeter.’”

Mario is Mario Cuomo. Even though he is a self-described Rockefeller Republican, O’Shaughnessy is perhaps the former governor’s greatest fan. His office is sprinkled with photographs of himself with Cuomo and he even has the governor’s old “1” license plate from when he was in office framed on his wall (he also has Nelson Rockefeller’s “1” plate). “In all the years I have been in this business and of all the people I have met and interviewed, Mario is the most compelling,” O’Shaughnessy says. “Kenneth Woodward wrote, `Cuomo never gave a speech that did not glisten with the sweat of moral conviction.’” He laughs. “That’s pretty heavy s*** to lay at the feet of one Andrew Cuomo.”

Still, O’Shaughnessy thinks New York’s current governor will one day be president of the United States and adds that he and Cuomo Sr. plan to stick around long enough to see it. “I think Andrew has the equipment and brightness to be a great president. There is an innate goodness and decency in him.”

The admiration society certainly is mutual. Mario gave the toast at the birthday celebration and has written the foreword to all four of O’Shaughnessy’s books. “Brother Bill’s been blessed with the great Gaelic gift of words, a sharp mind, deep conviction, and the capacity for powerful advocacy,” Cuomo says. “He has been able to inspire the fainthearted, guide the eager, and charm almost everyone he’s met. And for the quarter of a century that I have known Bill, he has spent most of his time doing things he ought to have been doing—and enjoying it.”

And he isn’t showing any signs of stopping. Relaxed with an open shirt, blue blazer, gray slacks and sockless Belgian loafers, the snow-white-haired O’Shaughnessy looks as though he could be headed for a casual lunch poolside, but he is still reporting to the job every day in his black Corvette with Lacey and Coco—his black and white cockapoos—by his side. Middle son David now runs the day-to-day operations (Matthew also works for the stations and daughter Kate, a psychotherapist, lives on the West Coast), but Bill actively pursues interviews and can often be heard on the air with his trademark strong, passionate editorials and commentaries.

He is particularly proud of an interview he conducted with Father Paul Lostritto last December. O’Shaughnessy, who describes himself as a “struggling, faltering, weak, uncertain Roman Catholic,” conducted a wide-ranging discussion that traveled the gamut from politics, to the future of the priesthood to feeding New York’s poor through the St. Francis Breadline.

The secret to being a great radio interviewer, he says, is to never be afraid of silence. He recalls getting a phone call a long time ago from actor, friend and lifelong Westchester resident Ossie Davis. “I had just interviewed Terry Anderson, who you may remember was a journalist who was held hostage for a long time in Iran,” he recalls. “I asked him, `Do you ever get mad at God for what happened to you?’ There was a very, very long pause and he finally said, `No, I’m a Catholic … it goes with the territory.’ Ossie called me and said, `That was the best interview you have ever done.’ When I asked why, he said, `Because you didn’t rush in to fill the spaces.’ I have always remembered that.”

Though reports of radio’s death have been eminent for years, the Westchester-born and -raised businessman says his industry is not on the decline.

“Radio is like Lazarus in the Bible,” he laughs. “You can’t kill it. It will always be the medium of the poor and lonely and the misunderstood. And radio is free. You don’t have to pay for cable or the Internet or expensive tools like an iPad to be able to use it.”

O’Shaughnessy has a reputation as a staunch defender of Free Speech and has been known to defend even the most outspoken and sometimes outrageous radio colleagues like Don Imus and Howard Stern, whose styles are markedly different from his own thoughtful approach.

“I applaud the white-haired mogul’s intelligent editorials concerning free speech,” Stern once said. “So many remain silent and it is alarming. He has always been there for me.”

O’Shaughnessy has written that words “that are sweet, awkward, horrific, barely audible, obscene, political, clumsy, uncomfortable, sexy, crude, inarticulate, cutting, insulting, serious, scintillating, disappointing, discursive, provocative, disgusting, vulgar, disjointed, unfair, dismissive, inappropriate, stupid, et al … are all part of the essential Language of America…all of it needs to be protected. All of it. By all of us.”

“The First Amendment is aptly named,” he says. “It’s the bedrock from which all our potential, our privileges, and our prerogatives all proceed.”

O’Shaughnessy is also extremely active with the Broadcasters Foundation of America. The organization raises more than $700,000 a year to help down and out former broadcasters and their families.

“Our profession has provided a nice life for so many and we never had a way to give back,” he says. “This helps people who have fallen through the cracks. Not every broadcaster makes a big salary like Oprah or Howard. I am on the executive committee and chairman of our Guardian Fund and believe me I know who the generous ones are and who are the cheap bastards!”

As for himself, O’Shaughnessy quotes his former mentor Martin Stone, who once said many years ago that WVIP was “his insurance policy against boredom.”

He is also hard at work on his fifth book, an anthology like his others, but highlighting interviews with townies and spotlighting “neighborhood gems” throughout Westchester.

“Bill is a true renaissance man,” says his longtime friend, former New York Inspector General Joseph Spinelli. “His literary and broadcasting genius is only exceeded by his kindness and generosity to his friends.”

These days O’Shaughnessy does admit to taking the occasional afternoon nap and feeling some of his three quarters of a century years. “I gobble my heart pills and blood pressure medicine and the pacemaker is cranking,” he laughs. “My friend Sirio Maccioni says that the Italians have a saying that if you wake up without an ache or pain, it means you’re dead!”

When he isn’t working or spending time with five grandchildren, O’Shaughnessy can be seen holding court at one of his regular haunts: The Four Seasons, “Maestro Sirio’s” (Le Cirque), La Grenouille, San Pietro or Primola in Manhattan, The West Street Grill in Litchfield or Mario’s iconic restaurant in the Bronx, where he can have his favorite spaghetti and clam sauce. “In the midst of a painful divorce from his second wife, O’Shaughnessy finds solace in being with friends and wherever there’s a good story to be had.

O’Shaughnessy says he has always viewed radio as a medium that’s “more than a jukebox.”

“I am lucky my portfolio has been stamped Westchester,” he says. “It’s where anyone and everyone comes to promote an idea. I want to make people think and inspire them to react.”

Perhaps not the most savvy “corporate” philosophy he could practice, O’Shaughnessy says that’s never been what he’s about.

“I would have not been successful in a corporate environment. I think of the late broadcaster Peter Bordes. He once said, `We both started at the same time and now I have 30 radio stations and you still have two.’ I just said to him, “That’s true, but how many more do I need to get a better table at Le Cirque. Or Mario’s?”

Lisa Arcella is a freelance writer and editor. Her work has appeared in the Daily News, the Vancouver Sun, Redbook, and the Wall Street Journal, among other publications.