Another winter, another Christmas.  And every year the New York Daily News reprints a lovely and touching Christmas story about a little lamb who was placed in the manger to keep the Infant warm on a cold night in Bethlehem.  I look forward to it and admire its beauty and sweetness every year.  It was written by Karen Zautyk, a former member of the News editorial board.

O, little lamb, who made thee? 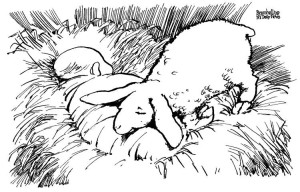 It was cold in the stable that night, and the animals were huddled together for warmth. The cows and the oxen and the donkeys.

And one little lamb.

Sad, scrawny little lamb, born lame and frail. Too frail to be out with the flock in the fields. The shepherds had carried it into the stable, where it would be safe from the wind and the wolves, for both the wolves and the wind came down from the hills with a fierceness in the wintertime.

The lamb had food and shelter, but that was not enough. It was lonely. Separated from its mother, it felt unloved. The other animals tried to be kind, but they had no time. During the day, they were busy working: The cows had milk to make, the oxen had earth to plow, and the donkeys had carts to pull.

At night, they were all very tired. They’d feed upon the fodder, and then go right to bed. None would talk, none would play. None would even sing a lullaby to a lamb that needed comfort. Every night the lamb would cry, and be told to hush, for its bleats disturbed their sleep.

Thus, that night, the lamb cried without making a sound, as it had learned to do. And it looked at the strangers who were sharing the stable. At the man, who held the woman’s hand and spoke to her so softly. And especially at the woman, who spoke not at all.

Huddled together, the animals slept, and eventually the lamb slept, too. And the night was silent.

But then, in the darkest hour, there was no more darkness and no more silence. There was the cry of a baby. And the stable shone with the brightest of lights and there were voices ringing in the air.

The animals, shaken from their dreams, were frightened. They stamped their hooves and tossed their heads and made their frightened-animal noises, but the light was so lovely and the voices so beautiful, it wasn’t long before they quieted and began to lose their fear.

And when the light had dimmed to a glow and the voices were only an echo, there in their manger, they saw the baby, and their eyes went wide with wonder.

The animals murmured but would not approach until the woman beckoned. Then, one by one, the beasts came forward. All, that is, except the lamb, which was only a baby itself and still terribly afraid. Forgotten by the others, it trembled in a corner and tried to hide beneath the hay.

But the baby in the manger was trembling, too. The cold of the night had returned, and the baby had started to shiver. When the animals saw this, they huddled closer about the crib.

The man took off his cloak and made a blanket of it, but the cloak was thin and threadbare and provided little warmth.

The woman held the baby to her breast. He shivered still, and she began to weep.

And the lamb, which knew what weeping meant, lifted itself from the hay. Though it was still afraid, it left its hiding place. It made its way among the legs of the bigger beasts, until it stood beside the woman, and it laid its head against her knee.

And the softest of hands reached down and stroked its wool.

And the gentlest of hands picked it up and tucked it into the manger straw, and tucked the baby in beside it, and covered them both with the cloak. The baby snuggled near, and smiled, and closed his eyes.

And the lamb was very glad it had learned to cry without making a sound. Because it was crying now and didn’t want to wake the child.

Then the lamb closed its eyes, too. And the woman sang a lullaby.

When I start to feel overwhelmed by the “commercial” Christmas I also resort every year to two stunning descriptions of that night in Bethlehem.  One by Monsignor Ed Connors and another by Father John O’Brien.  They’re both gone now.  But their vivid recitations live on in memory … and in two of my previous books.  Father Connors, as he preferred to be called, and Father O’Brien, both retired with the gift.  I hope my friends won’t mind if I recycle their genius one more time.

Has there ever been more powerful and beautiful recountings of the events of that sacred night so long ago that changed everything?  Well, I guess there was one … in a Book by a man named Luke.

But I can’t forget how the priest Ed Connors described it from the pulpit one Christmas Eve in 1993 in a Westchester church.

The Star and The Smelly Shepherds

“I listened to a Jerome Kern lyric ‘I told every little star,’ and I wondered about that One Star, the Star of Bethlehem.

God is often not the God we expect him to be.  He came in poverty and weakness and in suffering, attended only by smelly shepherds.

This Christ, I tell you, is not what we expected. We find Him not in a palace, but in a cave. He comes not as a warrior king, but as a tiny, powerless infant. He is a strange kind of king who now has a manger and, one day, a cross for his throne.

When the song of angels is stilled, when the star in the sky is gone, when the kings and princes are home, when the shepherds are back with their flock, the real work of Christmas begins: to find the lost, to heal the broken, to feed the hungry, to release the prisoners, to rebuild the nations, to bring peace among brothers … to make music with the heart.”

“For He would rather

die than live in eternity

Before he left us in 2009, Father John O’Brien, the pastor of St. Pius X Church in Scarsdale, sat at his desk in the warm parish rectory to write a Christmas message.  It was to be his last homily.  The priest was wracked with pain.  But there were many things to do to get the parish ready for the holy season.  He knew he was dying and the very next day John O’Brien would check himself into a New York hospital.  So he worked quickly, but carefully.  This is what he wrote as he sat in loneliness and silence on that cold day a few years ago in Scarsdale …

“Silent night, holy night. All is calm, all is bright.”

“A holy night to be sure, but hardly silent and anything but calm.

The “silence” of that night was shattered by the blood curdling cries of wild animals roaming the hillsides.  In a cold, dark cave a young, frightened woman gave birth to her child while her husband, a carpenter by trade, stood by helplessly.

Finally, amid the bleating of sheep and the braying of animals, the newborn’s first cry broke the stillness.  This “silent night” was filled with terror, pain and the bone-numbing exhaustion that sleep alone cannot relieve.

There was no “silence” that night so long ago in crowded, chaotic Bethlehem, bursting with visitors who had come for the great census.  In fact, there was no “calm” in all of Israel – only tension and conflict between the Jewish people and their Roman occupiers.  Ancient Palestine was hardly a place of “heavenly peace.”  It was a land torn by oppression, persecution and terror.  Madness reigned.

And yet … on this noisy, chaotic, anxious night, our Savior, the Light of the World was born.  Amid the pain and anguish of a devastated people, new hope was born.  The Messiah came at last with transforming joy.

Even though our world today may once more seem far from “silent,” our Church far from “holy,” our personal lives far from “calm,” the Prince of Peace has blessed our flawed and fractured world by walking upon it, by loving those in it relentlessly and unconditionally, and by laying down his life for all who pass through it.

For he would rather die than to live in eternity without us.

Emmanuel!  God is with us!  Let earth receive her King!

… Christmas story, this from a failed baseball player with too many vowels in his name … who I miss every day.

No word is more discussed, written about, thought about or misunderstood.

Everyone seeks it, and when it’s found, it makes everything else seem no longer worth seeking.

It costs nothing to give and it can’t be bought.

It’s best when graciously received and then passed on.

It brings with it warm smiles, deep contentment – sometimes tears of joy – and even a sense of justification.

Wise men analyze it; poets romanticize it, but no one improves upon it.

Some of us believe it was personified nearly two thousand years ago in a manger, in a stable, far from here.

Others see it embodied in other symbols and other events.

Almost all of us celebrate festivals to it at this time of year.  In doing so we are reminded how good a whole year could be – if only we were wiser.

William O’Shaughnessy, a former president of the New York State Broadcasters Association, was chairman of Public Affairs for the National Association of Broadcasters in Washington. He has been a point man and advocate for the broadcasters of America on First Amendment and Free Speech issues, and is presently chairman of the Guardian Fund of the Broadcasters Foundation of America, the national charitable organization.  He is also a longtime director and member of the Executive Committee of the Foundation. He has operated WVOX and WVIP, two of the last independent stations in the New York area, for 56 years as president and editorial director.

He is the author of “AirWAVES” (1999) … “It All Comes Back to Me Now” (2001) … “More Riffs, Rants and Raves” (2004) … and “VOX POPULI: The O’Shaughnessy Files,” released in January, 2011. He is currently working on his fifth book for Fordham University Press, another anthology which will include this Christmas piece “The Smelly Shepherds and Other Christmas Stories.” He has also completed “Mario Cuomo:  Remembrances of a Remarkable Man,” a tribute to his late friend Governor Mario M. Cuomo which has just been published to favorable early reviews.