Out and About of an Evening

Philip Roth has died. He was 85, tall, trim, an attractive man who carried broad shoulders and a smoldering genius for the English language. And in his 85 years he wrote some 32 books that caused him to be accused by the New York Times of being “a giant of American letters” and “a pre-eminent figure in 20th century literature.”

I bought and collected a few of his books, but I never read one of them.  I much prefer non-fiction and, as Roth himself once confessed, he did too.

I “knew” him mostly through our mutual patronage and affection for the West Street Grill, the estimable country restaurant on the Village Green in tony Litchfield which has been lovingly operated for almost 30 years by two marvelous and dear souls Charlie Kafferman and James O’Shea.  Philip Roth got there long before I darkened the door of the eatery.  For years he was a member in-good-standing of “The Roundtable,” a weekly private luncheon and lemon squeeze featuring the writers William Styron, John Updike, Arthur Miller and the actor Richard Widmark.

In recent years Roth would dine at the Grill on Sunday nights with Mia Farrow, still a knockout at 73.  She would drive over from her Frog Hollow Farm in Bridgewater. And the great writer would journey down from his farmhouse in the woods of Warren, Ct.

And on one of these agreeable nights the proprietor Charlie Kafferman, as I was about to sit at table 21, steered me over to the adjacent table #22.  My compadre Gregorio Alvarez and I were at table 21.

Here is a snippet of dialogue from that evening:

O’Shaughnessy: “Charlie, don’t do this to me.  I am not worth to loose the strap of his sandal …”

Roth: “I know him, Charlie …we talk baseball.  You know Mia (Farrow).  We thought you were in Radio.  What kind of books do you write?”

O’Shaughnessy: “Anthologies … but my new one is about Mario Cuomo and our friendship … I admired him.”

Roth: “Oh, I see … you really write about all your friends!” (laughter)

The great writer couldn’t count the number or frequency of the literary awards bestowed on him or the encomiums showered on the canon of his prolific works.  So one day Roth called his friend Charlie to beg a favor. “Charlie … I’m being given some big award up in Hartford by the governor and I just don’t feel like schlepping up there. Could you ‘represent’ me and accept on my behalf …?”  So Kafferman and his partner James O’Shea journeyed to Hartford to accept the award, a two-foot tall bronze with outstretched hands in a “winged victory” stance, from the Governor’s hands and lugged  it back to the Grill where it sits to this day.

But the story doesn’t end there. A few weeks later Roth was summoned to Washington to be honored as “America’s Greatest Living Novelist” by President Barack Obama.

When Mr. Roth came in for dinner the next week, his friends at the restaurant inquired how the Presidential Award ceremony went: “It went fine … but when I went up to receive the award … the president whispered, ‘Where’s Charlie’?” He was really disappointed!  (Roth swore it was a true story).

Someone once said he could have been a stand-up comic. When he wasn’t out and about of an evening making people laugh, Philip Milton Roth published almost 90 books including Hispanic and foreign editions of his American classics among which were Goodbye Columbus … American Pastoral … Portnoy’s Complaint … My Life as a Man.  And then in 2012 he closed down his computer and put a lid on his genius for all time to come.

“I was by this time no longer in possession of the mental vitality or the physical fitness needed to mount and sustain a large creative attack of any duration.”  He actually put a Post-it note on his computer: “The struggle with writing is done.”

He also said: “Old age isn’t a battle, old age is a massacre.”

He inveighed against the “diminishments” which assault us as we confront old age. It’s a marvelous word often used by Mario Cuomo and Father Pierre Teilhard de Chardin, the brilliant Jesuit philosopher-paleontologist.

“When I write, I’m alone.  It’s filled with fear and loneliness and anxiety and I never needed religion to save me.”

He was a Jew, to be sure.  But he hated to be called a “Jewish writer.”  “I am an American writer, if nothing else …”  he once said.  And like Mario Cuomo, he was denounced by his own. Mr. Cuomo was criticized and censured by auxiliary bishops.  Roth was assailed by influential rabbis.

He was also a self-professed “atheist” who had a deep and abiding distrust of Organized Religion.  But despite his strong feelings on the subject, he was a nice man in every season with an altogether attractive persona who in his 85 years entertained millions and made them think … while causing some of us to laugh of an evening at his favorite watering hole.

He left us earlier this week with all those books I never read … his great good nature … and that marvelous sense of humor.

I was not worthy to loose the strap of his sandal. 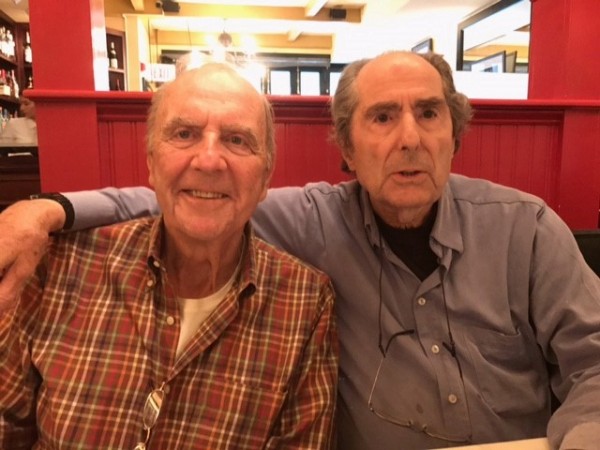 William O’Shaughnessy, a former president of the New York State Broadcasters Association, was chairman of Public Affairs for the National Association of Broadcasters in Washington.  He has been a point man and advocate for the broadcasters of America on First Amendment and Free Speech issues and is presently chairman of the Guardian Fund of the Broadcasters Foundation of America, the national charitable organization.  He is also a longtime director and member of the Executive Committee of the Foundation. He has operated WVOX and WVIP, two of the last independent stations in the New York area, for 56 years as president and editorial director.

He is the author of “AirWAVES” (1999) … “It All Comes Back to Me Now” (2001) … “More Riffs, Rants and Raves” (2004) … and “VOX POPULI: The O’Shaughnessy Files,” released in January, 2011. He has also written “Mario Cuomo:  Remembrances of a Remarkable Man,” a tribute to his late friend Governor Mario M. Cuomo which has just been published.  He is currently working on his fifth book for Fordham University Press, another anthology.